From the training centre, Marr and Luna made their way back towards the common areas.
They had an hour or so to kill before the transports would resume their runs to the Citadel.
“I need to speak with you two,” came a voice from behind them.
“What The!” Luna exclaimed as she spun around.
“Follow me,” Mentor said as he brushed past them.
“Do you think he will continue to creep about when we are all on the rig?” Luna whispered to Marr.
“I may be a little aloof, but I am not deaf, Luna,” Mentor said as he ushered them into a storage room.
“I need you to collect your weapons from your lockers and bring them here. Place them in the false compartment of this crate. Put that on top and seal it up. I’ll see that it is safely stowed aboard the Dinatha this evening,” Mentor instructed as he pointed to a stockinette wrapped beef carcase lying on the table next to a food storage container.
Luna’s mouth dropped.
“You expect me to put my prized possession in with that dead cow?” Luna stated.
“Yep, see you in a couple of hours,” Mentor shared as he turned and left the storage room.

Ninety minutes later, Marr and Luna were sitting in an observation deck at the port. They were waiting for the arrival of the Dinatha.
They had just watched a rig disappear over the horizon.
“Let’s do some revision. What just happened there?” Marr asked.
“Really?” Luna responded.
Marr said nothing and continued to look out towards the horizon.
“A rig just shot out over the horizon,” Luna replied.
“Seriously?” Marr exclaimed before continuing, “explain it as if I am seeing it for the first time!”
Luna sighed, but conceded and started to share unenthusiastically.
“The remotely controlled low loaders brought the rig out of the port and lowered it on to the maglev track. The maglev system then took the rig out of range of the Citadel. Over the horizon.”
“What control over the process do the crew have?”
“None, until the rig is well down the track. The low loaders and then the maglev system prevent the rig from starting its engines until well clear of the Citadel.”
“Why is that?”
“Because the rig is basically a flying bomb. The fuel cells and DMD are highly volatile. The rig could cause significant damage if it were crashed into the Citadel.”
“Correct. And what is the other purpose of the maglev?”
“The rigs are basically optimise for space flight, not atmosphere flight. They can’t get lift at less than 900 kilometres per hour. So the maglev system builds up the speed allowing the rig to get airborne without needing to use vertical thrusters. Once airborne, the rig can engage a hard burn and enter orbit.”
“Great, top marks. Now what of the landing?”
“Things happen in reverse. The rig drops out of the sky towards the outer end of the maglev track. It flies along the track, attaches, shuts its engines and then coasts into the port.”
“What makes this sequence even more risky?”
“During descent, the rigs use the heat and friction to replenish their fuel cells. They create far more than they need and they even often sell it on after landing. Therefore by the time the rig reaches the Citadel it is an even more capable flying bomb!” Luna shared with glee visualising the damage that could be caused. It was significant compared to the miniscule amount of damage she could do with her rifle.
Marr rolled her eyes. She had picked up the change in tone and joy in Luna’s voice.
“How does the Citadel prevent some crazy person like you flying a rig directly into the wall?” Marr asked in jest.
“The Citadel’s defences track incoming rigs. The automated defences show no hesitation in blasting a rig to kingdom come if it diverts off the scripted approach. Equally the defences will activate if the rig doesn’t cut it’s engines before the outer marker.”
“What happens if the rig connects to the maglev but keeps its engines running?”
“Just after the outer marker there is a side track that ends in a very solid concrete wall!”

At that moment they caught the sight of the rig in the distance.
It was merely a speck but was clearly in a hard burn. It was racing away from them, and accelerating fast towards the upper atmosphere.
“That has got to hurt!” Luna shared.
“How is it, that after all this time of watching these rigs, it is only now that you are making these types of observations?” Marr commented.
“I never had to consider actually being in one of those contraptions, until now!”
“Well, I understand that reaching orbit is a walk in the park compared to traversing.”
“Way too much information at this stage, Marr. Baby steps! I am going to worry about getting through this ordeal first,” Luna added as she contemplated things further. 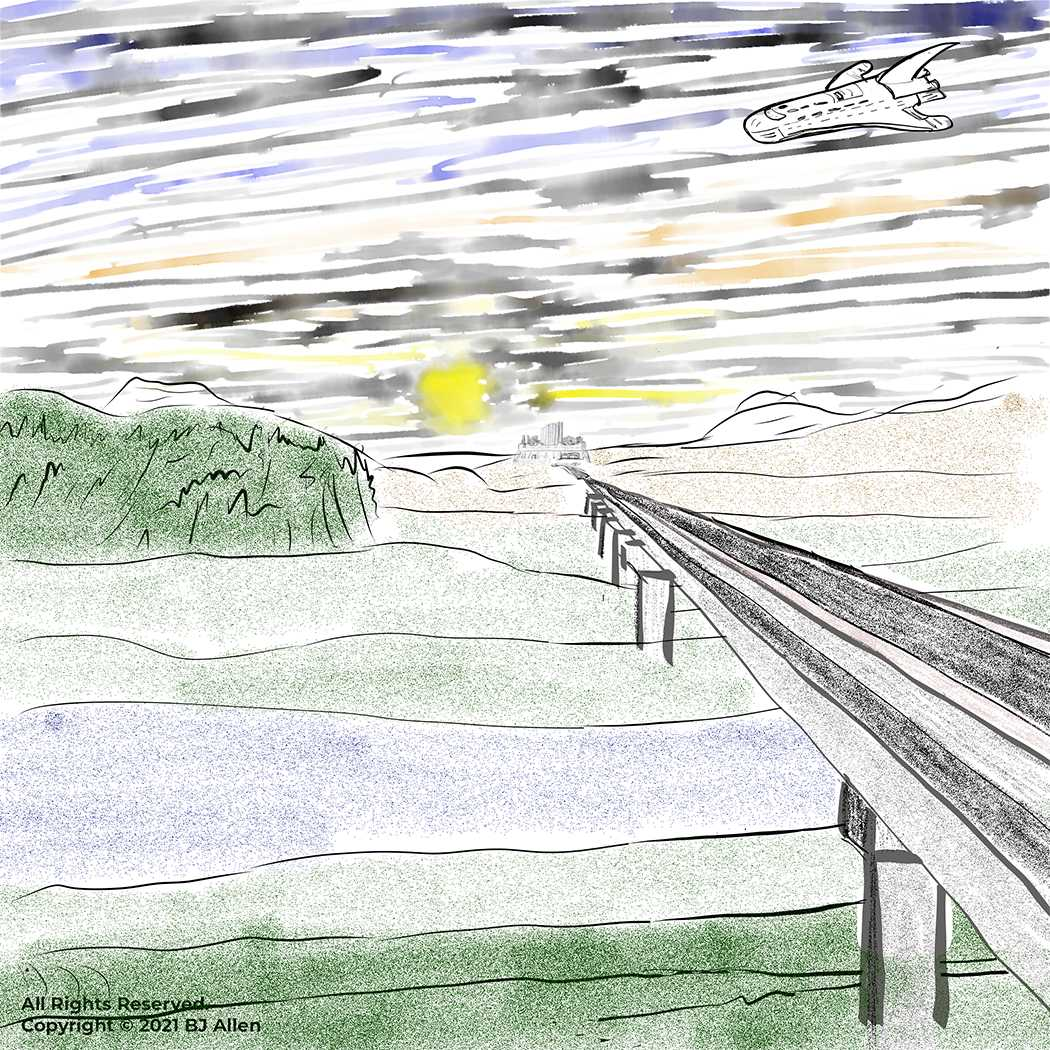