Dukk woke with a start. Something was wrong. He collected his focus. He realised he’d been woken by the wake up notification he set just under six hours ago.
“Oh! Clearly my rhythm is totally out of whack,” he said out loud.

Dukk sat up, threw his legs off the bed and did some basic stretches.
He checked the time. He had 45 minutes before the start of his next watch.
“Enough,” he reflected as he headed for the bathroom.
Moments later he was in his gym clothes. Skin tight shorts and a sleeveless skin tight top. He also wore runners designed for use in near zero gravity.
He opened his cabin door and entered the crew mess.

The crew mess was dimly lit. Night mode was in effect.
Luna was at the console. Logs and video feeds filled her view and coloured the room.
Bazzer could be seen in one of the video feeds. He was in a tight space and giving his attention to an object on the floor of that space. Whatever he was doing, it was hard work. He had his g-suit half off. The evidence of the exertion was clear on the inner layer that clung to his muscular upper body. Dukk identified that Bazzer was within one of the wings.
Luna looked around. She looked Dukk up and down in his gym gear. She lingered briefly before smiling.
“Good morning, cap.”
“Good morning, Luna. How is it all going?” Dukk responded with a smile.
“All pretty straight-forward.”
“Tired?”
“A little, but mainly restless. Are you off to the gym?” Luna added cheekily still gazing at his body.
“Yep,” Dukk replied feeling a tad self conscious.
“I am looking forward to getting in there when you and Marr start your watch.”
With that, she gave him one further look up and down, smiled again and then turned back to the console.
“Has Bazzer been showing you the ropes?” Dukk asked regaining his composure.
“Yep. And in between he has been in the wings. He tells me that the reconditioning of the stabilisers left a lot to be desired. He said he didn’t want either playing up when we exit the traverse.”
“We are lucky to have the likes of him on board. Any more apprentice hijinks?”
“Nope. Some laughs but nothing like the gravity stunt in the cockpit earlier.”
“Have you got him back?”
“Not yet?”
“I have an idea. Between us.”
“Shoot.”
“Which wing is Bazzer in?”
“Starboard.”
“Okay. Enable sound on the video feed. Now, open up the system protocols page. Select ‘Wellness, Health and Safety’ and locate the ‘Alarm Tests’ panel.”
“Done.”
“Find ‘Starboard wing depressurization’ and choose ‘Localised Only’.”
“I like the sound of this,” Luna said as she hit the execute button.
The sound of the alarm came back through the video feed. The video feed showed Bazzer jump and bounce off the side of the wing wall.
“Very funny, Luna. Good morning, Dukk. I assume,” Bazzer said looking up at the camera as he regained his footing.
Dukk hit the two way audio button, “Good morning, Bazzer. Will we be good for a traverse?”
“Yep, nearly done,” came the reply.
“I’ll leave you two to get on with it,” said Dukk as he smiled at Luna and headed for the door.

The corridor through the guest accommodation was also dimly lit.
Dukk was in the habit of getting in a brief and intense workout before the early watch. He would then do strength conditioning and endurance later in the day. While the gym was rarely empty, it was generally free in the early hours.
A quick check of the door control panels informed Dukk that all cabins were occupied.
“Good, I should have the gym all to myself,” Dukk reflected quietly.
He was wrong.
Marr was on the treadmill, sprinting. Wearing shorts and a crop top. Her body showing the signs of the intensity of the workout. She was stunning. She had amazing tone and grace. A pristine example of the potential of the human form in peak condition. Dukk had to check himself in case he found himself staring.
The treadmill beeped as the program moved into warm down mode.
Marr looked over. Dukk realised he had failed to not stare. Marr smiled.
“Good morning, Captain.”
“Good morning, Marr. I see we share the same idea about getting time alone in the gym by making use of quiet times,” Dukk offered doing his best to regain his composure.
“Not quite. I am nearly finished my workout. Had the place to myself. You won’t have this space to yourself until I am finished,” Marr responded cheekily.
“Point taken.”
Marr smiled.
“You have amazing muscle definition,” blurted Dukk. His tone clearly indicated he had failed to keep things in the professional realm. Instantly berating himself for not keeping the Amygdala in check.
“Thank you, Dukk,” Marr responded gracefully.
“Was there something in how she said my name?” Dukk thought before berating himself further for allowing the amygdala to continue the self-talk loop.
“I am done with the treadmill. Do you want it now or will I turn it off?”
“Leave it on, I’ll use it after I do a few stretches. Thanks.”
“You know, I was concerned about staying in shape out here amongst the stars,” Marr said as she stepped off the machine and took a moment to observe Dukk.
“You aren’t any more?” Dukk asked as he started his stretching routine. The skin tight shorts and sleeveless top doing nothing to obscure his fit and muscular body.
“Well by the look of you, it is very doable,” she answered cheekily.
“Thank you, I think,” Dukk answered laughing.

Marr thoroughly enjoyed her warm down. She snuck glimpses of Dukk getting into his routine.
“The time alone was good, but having company like this is much better,” she reflected to herself at one stage.
When done, she turned to Dukk.
“I’m done. This space is all yours. I’m off to try the longer shower cycle. Any tips?”
“For washing long hair? No sorry, my areas of expertise lie elsewhere.”
Marr looked sideways at Dukk and laughed.
He laughed back as she left the gym. 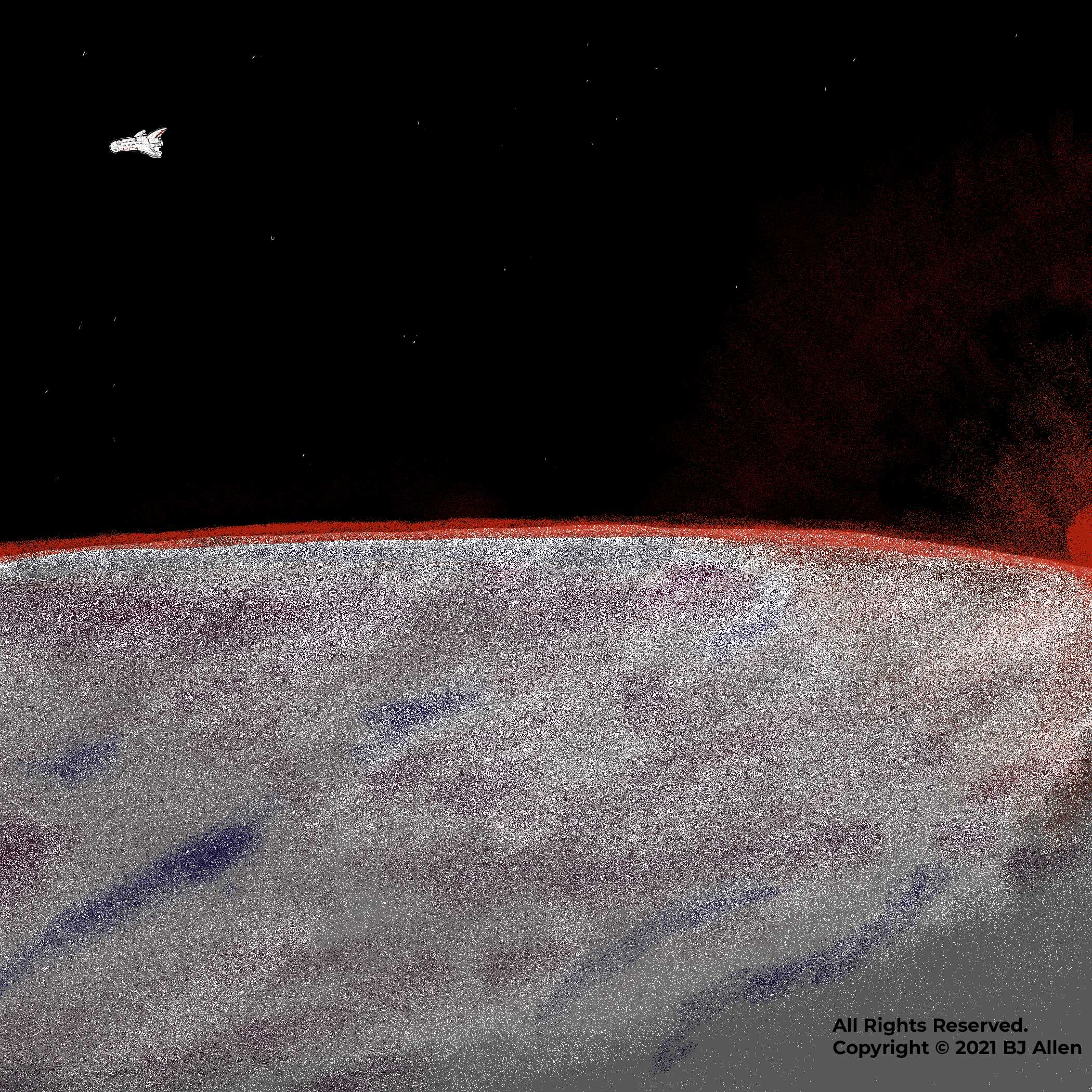