On entering the final hour of the watch, Dukk and Marr were back in the cockpit. Dukk had just returned from doing a walk around.
“All good?” Marr asked Dukk as he sat in his seat.
“Yep, mostly all quiet. There is some movement as everyone re-starts their day. Have a look at this,” Dukk said as he interacted with the console.
A video feed appeared before them. Dukk had enabled sound too.
It was a view of the hold airlock. Annee and Mentor could be seen jumping around and bouncing off the walls. Annee was dressed in a sports bra and gym shorts. Mentor was only wearing gym shorts. They were both sweating profusely.
“Wall ball?” Marr commented.
“Exactly. The airlock isn’t a perfect court. But it a little more unpredictable and that adds to the challenge and entertainment value.”
“What are the rules?”
“Hands or bare feet only. The ball can only touch another surface twice between turns. Miss your turn and your opponent scores a point. First to twenty one wins. Outside that, anything goes.”
“Anything?” Marr looked over and raised her eyebrows.
“Yep,” Dukk said grinning.
The ball could be seen changing colour as it hit the walls. First yellow, then orange and back to green as Annee or Mentor hit it back towards the walls, ceiling or floor.
“The ball senses the hands and feet verses the surfaces or body?”
“Yep.”
Annee and Mentor were in an intense rally. Mentor dove to the floor and just touched the ball. It bounced gently along the floor and turned red.
“Nine to fifteen. I am catching you Annee,” Mentor puffed from his position sprawled on the floor.
“I’m being kind old timer,” came Annee’s reply as she put out her hand to help him up.
Marr reached over to the video feed and pressed the audio button.
“Come on, Mentor. Don’t let us new comers down.”
“Oh, is it going to be like that is it, Marr? Challenge accepted. What do you think, Dukk?” Annee said out loud at the video camera.
“Definitely. Best of three. Marr and I will play later today,” Dukk said into the feed looking over at Marr.
“You are on, Captain.”
“Annee, finish him. After I beat Marr, Bazzer and Luna won’t even need to play!”
“Not a chance,” Marr fired back smiling.
“Right, my serve,” Mentor said as he retrieved the ball.

Marr and Dukk watched the rest of the match. They added plenty of encouragement and the odd dig.
Annee countered Mentor’s height and strength advantage with her agility and knowledge of the space. She used all the corners to her advantage. Mentor scored only one further point.
“Challenge is on, Marr. I hope you picked up some tips. You’ll need every trick you can conjure to beat Dukk. He rarely loses,” Annee said as she used a hand towel to mopped the sweat from her body.
“Oh, really,” Marr said looking over at Dukk.
He grinned back as he flicked away the video feed.

“So you have a competitive streak, Dukk?”
“Surprised?”
“Not really. I just didn’t get that from your BIO.”
“I guess I like to hold some cards close.”
“Don’t we all.”
Dukk looked up from the console and his perusing of the system logs.
“You didn’t hesitate to make this all more than exercise. You showed your competitive streak. What other cards are you holding close?”
“Somethings are best not known,” Marr said grinning.
Dukk laughed. They both returned to interacting with their consoles.

“Can I get your views on something?” Marr asked a little while later.
“Shoot.”
“I was reading the passenger manifest. It says the two passengers heading to Mayfield, Bognath and Carltor, are tourists.”
“It does.”
“They don’t exactly behave like tourists. They behave more like soldiers. What is your take on that?”
“My take is that their behaviour is intentional. They want us to know exactly what they represent.”
“And what is that?”
“The buyer’s interests. Their destination matches the load’s destination. They behave like they are in the protection business. It looks to me that they are protecting the buyer’s interests.”
“Are you okay with that?”
“Absolutely. There are a lot of dangers out here. Advertising their presence helps reduce the chances of unwanted intrusions or even racketeering.”
“It doesn’t prevent it?”
“Nope. There is just too much space out here for the Elites to protect fully. And, everyone is corruptible?”
“Even you?”
Dukk looked over at Marr. Narrowed his eyes.
“Are you trying to recruit me for your war?”
“Maybe,” Marr said provocatively.

“What about the other two, Joantyi and Larony. The manifest says they are traders. They are only going to MappleTower, a dodgy space port. Hardly the centre of commerce. Is that a lie too?”
“I don’t know yet. I have had zero interactions with Larony and only a little more with Joantyi. Besides, you’d be surprised how much commerce gets done in dark bars and dodgy corners. What is your take?”
“I had some brief interactions with Larony. He seams genuine. He has a gentle manner. Not exactly the traits of a sales person.”
“Perhaps it is an act?”
“Why do you say that?”
“Those moving in and around space ports include those directly engaged in hauling and also those that benefit from it. This includes undesirables. You have the usual parasites like prostitutes and drug dealers. But you’ll also find racketeers and their enforcers and collectors.”
“Interesting. I guess we’ll learn more over the coming days. It is after all, a small space we are all inhabiting.” 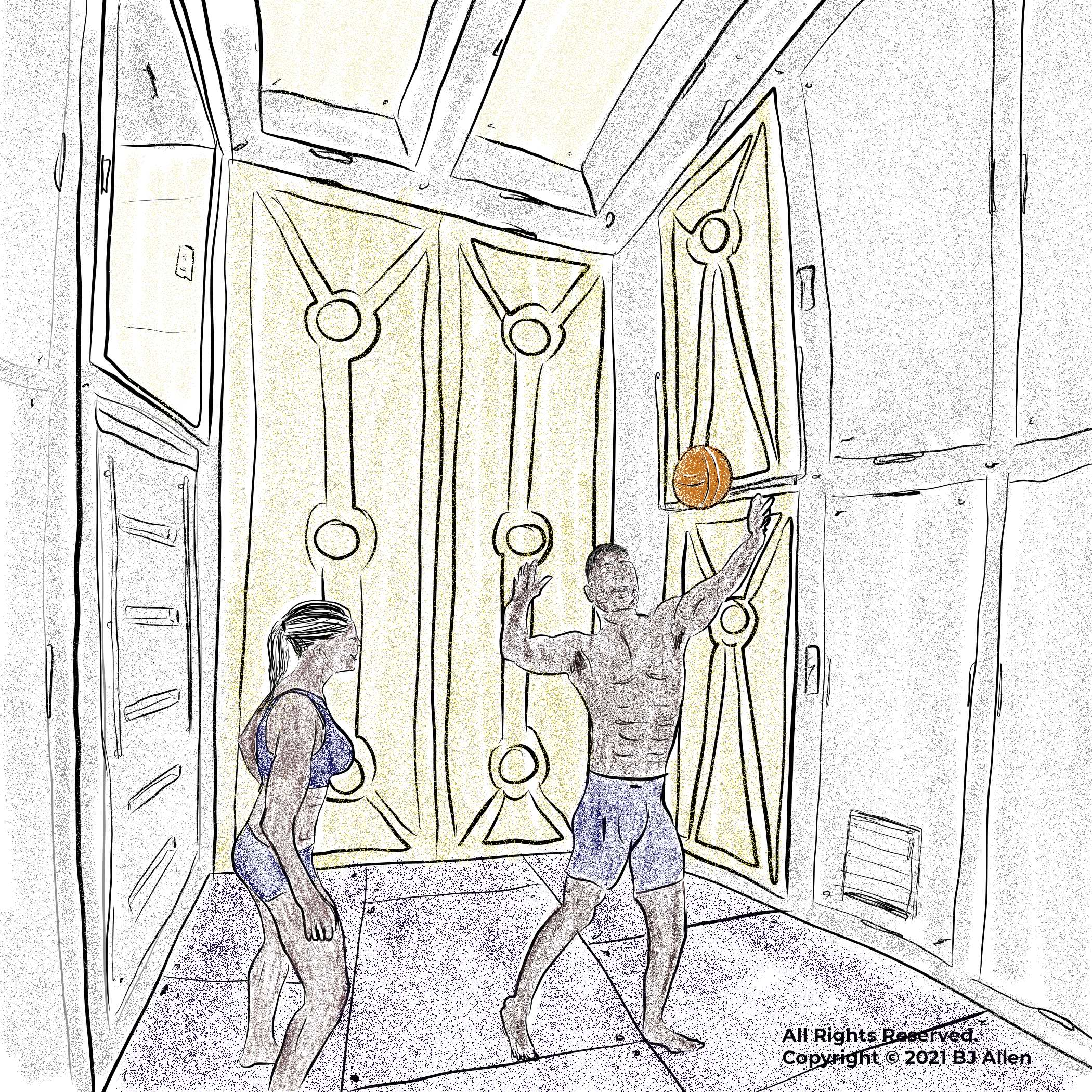