With the score one a piece, the excitement going into the evening watch was the match between Bazzer and Luna. Annee and Mentor said they were going to watch the replay later, because sleep was their priority.
Marr requested with Dukk that they base themselves in the crew mess initially so they could enjoy the banter with Luna and Bazzer as they got ready.
Bazzer was the first to appear following some short downtime at the end of watch. Marr was alone in the crew mess as Dukk was on a walk around.
“I am ready!” exclaimed Bazzer as he exited his cabin.
Marr turned around and nearly fell off the console seat.
“Holy cow! Are you for real?” she laughed.
Bazzer was wearing bright green, skin tight shorts and a bright orange, skin tight singlet that barely covered his overly muscular upper body.
“I figure, against Luna’s youth and fitness, using humour will be my only chance!”
“Well, you have definitely got me laughing.”
Bazzer grinned back sheepishly.
“Oh shit! I forgot my sunglasses,” Luna laughed as she appeared at the door of her cabin. She mimicked covering her eyes as she looked at Bazzer.
“You can hardly talk!” Marr added as she laughed even harder.
Luna was wearing a very small, hot pink bikini that barely gave any cover and look to offer very little support.
“What the F!” exclaimed Bazzer, and continued, “How in the world will I concentrate on the ball with you bouncing around the airlock like that!”
“That is the idea,” Luna laughed.
“This will be a battle of wills, not skill,” offered Marr.
They all laughed.
“What is so funny,” Dukk said casually as he entered the crew mess via the ladder shaft door.
“What the hell! What did you two do, ransack Kimince and Terence’s lockers?” he added.
“Stand over there together, I have to get a photo,” Marr requested.

The photo was nearly impossible to take. The sight of Bazzer’s outfit against his pale skin tones, next to Luna in the hot pink bikini against her brown skin, was too comical for anyone to keep a straight face.
The attempt at getting a photo, set the tone for the match. It was a shemozzle. Luna and Bazzer spent most of the time falling over each over laughing.
In the end it was abandoned and declared a draw.

“I haven’t laughed that hard in a long time,” Marr said as she flicked off the video feed of the airlock.
“Me neither. I guess we’ll have to start over and play again?” replied Dukk as he stepped back from the console.
They looked at each other.
“It does. You up to it?”
“Absolutely,” Dukk said in an overly enthusiastic tone. He blushed and turned away quickly.
Marr smiled.
“Will we move the conn upstairs,” she offered to reset the mood.
“Yes, good idea. I’ll go up directly. It’s your turn for a walk around. See you up there.” 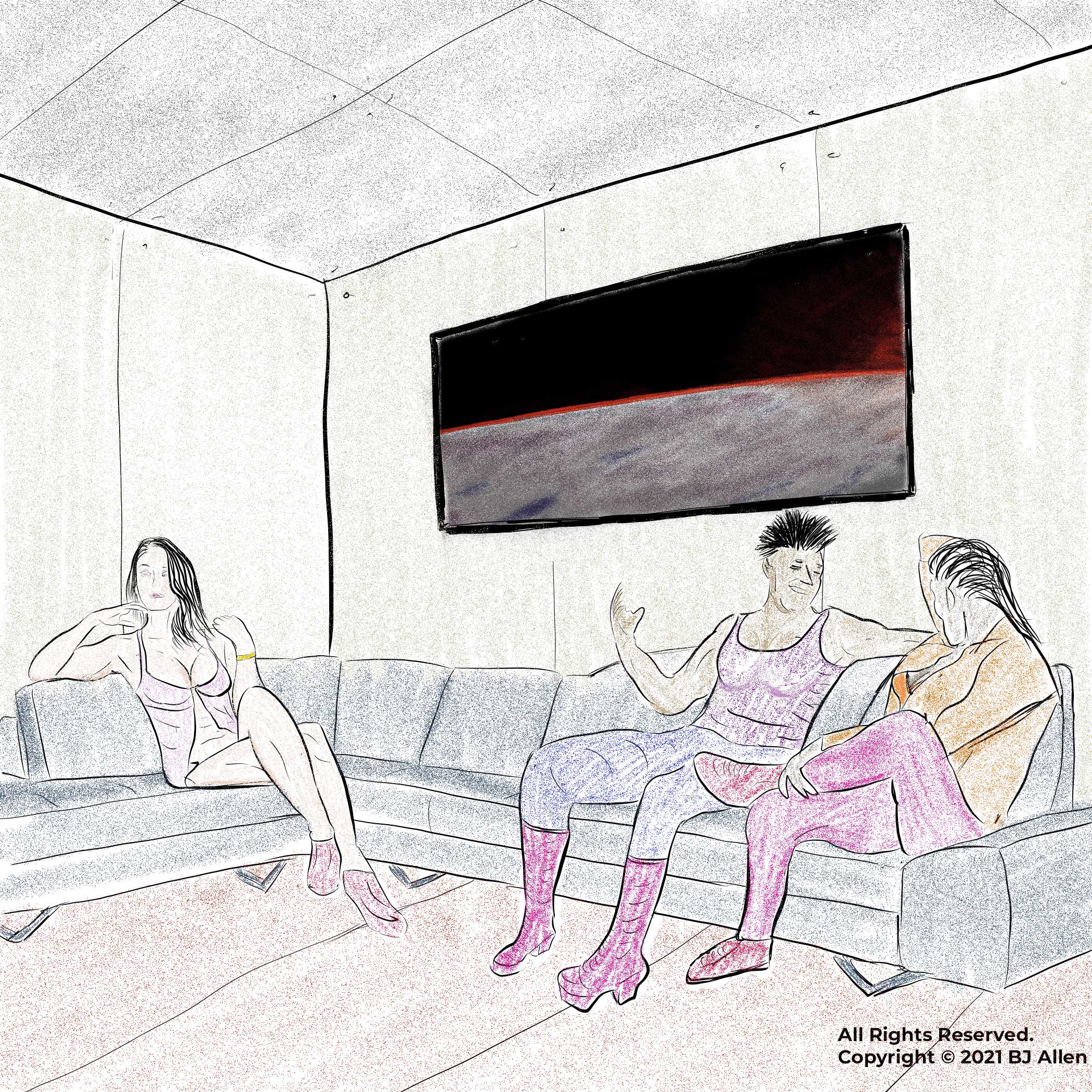