The descent had been uneventful. They had made good time and didn’t see any further delays. Dukk had stayed in the cockpit for the slow and steady descent into Kuedia.
As they came over the large continent in the northern hemisphere, Dukk reflected on his favourite approach, the track into Utopiam.
The smallest of the five citadels was located in the eastern region of the massive island continent in the southern hemisphere. His fondness wasn't logical. Being smaller, it was less likely to produce the most lucrative business. The fondness wasn’t even the view that he enjoyed immensely as the rig tracked out of the upper atmosphere. This view included the vast western coastline with its crystal clear blue water and bright white beaches. And the red dirt that stretched out from the coast. During certain descent paths, he would even get glimpses of the remains of a sprawling city that was long gone. Unlike the ruins in most other places, which were ugly and disturbing, here the vast coastal desert almost hid the destruction all together. He would look out and fantasize what life would have been like in the times before the war.
No, the fondness was something else. Something he couldn’t quite put a finger on.

Dukk had the cockpit to himself for much of the descent.
As advised, the passengers and observer had mostly stayed put in the passenger seating area. Whilst spread out over three hours, the return to full gravity and deceleration was unsettling to those who weren't familiar with it.
Bazzer had been determined to do another session of pumping iron before the mandatory overnight stay away from the rig.
Larinette kept busy in her cabin deciding on the outfit to wear for the evening’s celebration.
Annee caught up with Rachelle. Dukk sensed something wasn’t right. Annee had been distracted during the post reentry checklist review. He guessed that she and Rachelle had some important things to work out.
Being alone in the cockpit suited Dukk fine. The need to find a contract was weighing on him. He was keen to get started on his own terms. He didn’t want to get tied into some one-sided deal simply because he was the new kid on the block.
When the rest of the crew returned to the cockpit, for the final approach and set down, Dukk still found it hard to engage in the chatter about the plans for the evening.

The customs clearance only took an hour.
Rachelle had then given Dukk and Larinette the rest of the afternoon off to relax and get ready for the evening’s celebration. Rachelle felt she didn’t need their help to supervise Bazzer and Annee as they managed the disembarkment and unloading of her last payload.
They would also use the afternoon to prepare the rig for tomorrow morning’s inspection, a necessary condition of the intergalactic transport game. The observers were suspicious and insisted on thoroughly inspecting all systems. They also used the inspection to apply upgrades and install any further monitoring equipment. When unloaded and with everyone off the rig, a Squad of sentinels would be stationed to watch the rig overnight until the observers got there in the morning.

After packing Dukk’s belongings into lockers, ready to move to the master cabin, Dukk and Larinette left the Dinatha and checked in to a h-pod. They found one that was a stone’s throw away from the restaurant book for this evening’s celebration.
After a little downtime they headed out into the narrow streets that surrounded the port.

“You have to wear something nice tonight, Dukk,” Larinette pleaded as they approached the nearest Hyperloop station.
“My favourite red shirt and blue chinos will be fine,” Dukk replied.
“That shirt was fine two years ago, it isn’t fine anymore!” came the retort.
“Fine, if you see something that you think will suit me better, get it and I’ll pay you back! But I am not going shopping, I have work to do!” Dukk insisted.
“Fine!” Larinette stated as she entered a carriage and left him standing on the platform.
A slight smile touched his face as he watched the Hyperloop disappear around the corner. Dukk was quietly pleased with himself for standing up to her.
Larinette was heading to the outer ring’s retail district. The retail district was adjacent to the larger h-pods. These were typically occupied by older and retired deprivileged, who had accumulated influence and means. The streets were wider and there was less evidence of any trouble with sentinels. This was unlike the port area, where the streets were narrow, and the buildings stacked on top of each other. Also, the buildings near the port were often cracked or blackened following trouble.
Rachelle had her eye on a h-pod in the nicer area, which also had places to eat and socialise. Dukk found it odd that Rachelle had decided to stay within the port district for tonight’s celebration. Annee had said it was for old time’s sake. Dukk didn’t feel that fitted with what he knew of Rachelle. 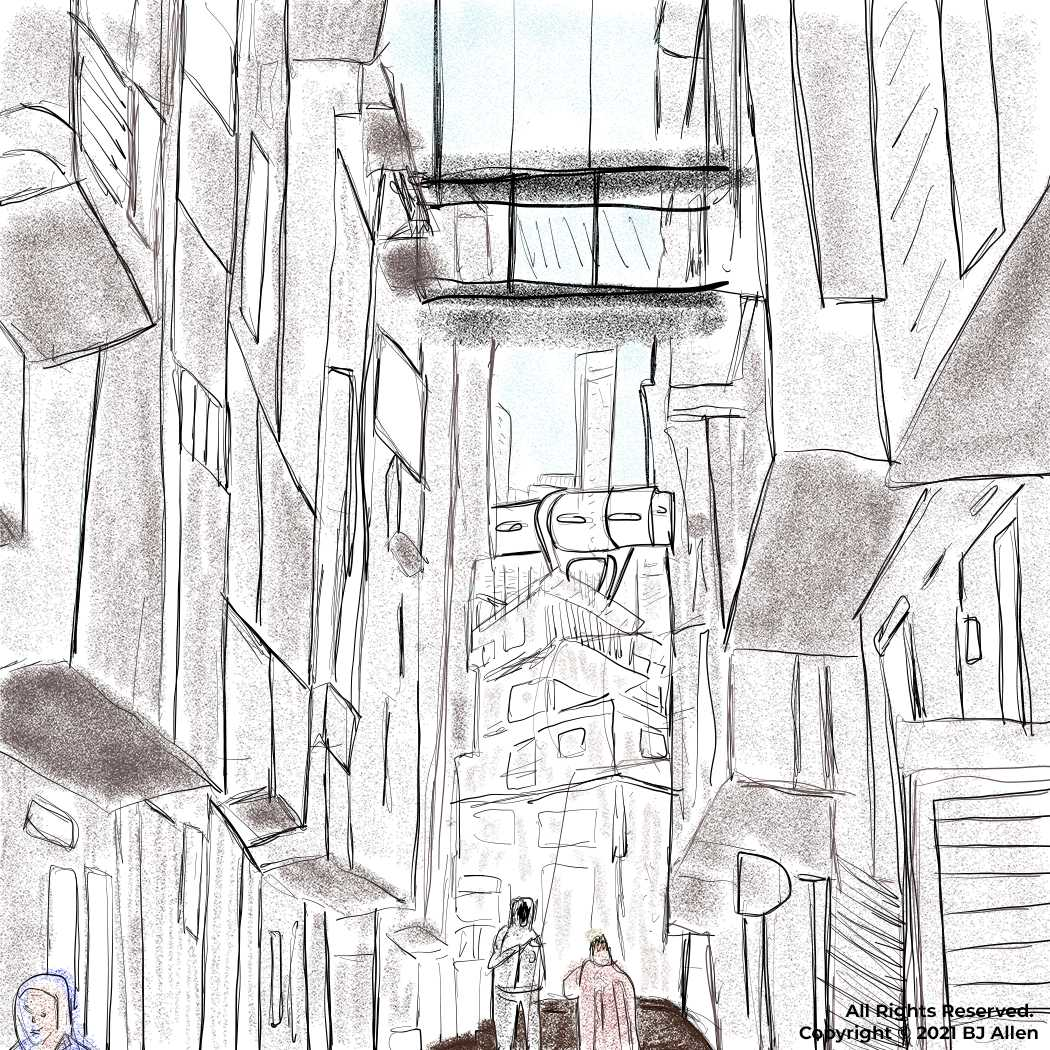