Chapter 4 - Cause and effect

Marr and Luna were walking quickly but methodically as they moved deeper into the wild.
They were covering their tracks away from the outcrop that sentinels would soon be searching. That outcrop overlooked the Citadel and had a direct view into the port and one of the pads used to house a rig. And all was not well on that pad.
There had been an explosion causing minor damage to the under carriage of the rig on the pad. The scene at this point was one of chaos as sentinels and observers tried to fathom what was going on.

Marr’s mind was not on the scene at the port. Nor was her mind on the task at hand. Covering her tracks was second nature at this point. No, her mind was on the events earlier in the morning.
The start to the day had been routine. Marr and Luna had alternated between the shower and eating, such that they were ready to leave on time at 6am.
As they left their h-pod, they noticed a man and a woman talking, further down the passage. The man was tall, muscular and of dark brown complexion, with cool undertones. He had dark brown eyes and short black hair with wisps of grey. The woman was fair and average height. Marr and Luna paid little attention to them and moved swiftly down the corridor in the opposite direction. Immediately the two stopped talking. The man split away and started following Marr and Luna.
The closest Hyperloop station was embedded in the outer walls of a series of warehouses that serviced the port. There were many routes to this station.
On this occasion Marr and Luna chose a route that took them via a corridor which they knew had disabled cameras. They knew this because they had disabled them. This route took them down a series of passageways, up some stairs and over a walk way that bridged the outer ring with the middle ring.
The man followed the two women over the bridge. He then turned into the corridor on the other side. A little way down the corridor the women stood, backs to him, waiting.
The moment he came into the corridor they started to walk again. Matching his pace.
In a single movement they all waved their hands over their wrist bracelets. The bracelets glowed green.
“Pad 16b. Just enough to keep the rig out of the air for 1 or 2 weeks. No collateral damages. The window opens at 8:50. Eight-minute intervals. Eight chances. Single shot. There is no alternative window. Make it count,” shared the man.
Seeing Mentor for the first time in months, threw them a little.
Marr reflected, “it is unusual for him to deliver a message in person. It was clearly important and a further confirmation that things were in motion. All the preparation would be put to good use soon.”
“Pay a visit to the Teacher when you are done,” he concluded.
With that he pushed past them and turned into another passageway.
Marr and Luna looked at each other, smiled and then disabled their bracelets. Then, they continued on as if nothing had happened and made their way to the station.

Unlike Marr, Luna wasn’t reflecting on the meeting with Mentor. As she hid her tracks, Luna was going over the job. She was looking for possible oversights and calibrating the risks of them being caught.

Luna started her assessment following the encounter with Mentor.
They hadn’t seen anything unusual as they waited for the Hyperloop. It had arrived a few moments later and took them to the stop near their transport.
They passed swiftly through the control doors and caught their usual transport into the wild. Still nothing unusual.
The quadcopter made two routine stops. All but Marr and Luna departed at one or the other of these stops. With the hold to themselves, they accessed their hidden lockers and retrieved their specialised equipment and fatigues. They swapped all of this for a fresh set of keeper overalls, which they had within their backpacks.
“That was all as per normal,” Luna reflected.

With the routine stops done, the quadcopter accelerated and dropped over the horizon. It eventually came to rest briefly near some old and rundown sheds and hangers.
When Marr and Luna had jumped clear of the transport, it ascended again and headed back in the direction of the Citadel for another run. Still business as usual.
From the drop off point, they had made their way to a nearby rusty hanger. Within the dimly lit building they were confronted by two of their colleagues. They were sitting at an old table and sipping hot drinks. A brief acknowledgement in the form of a nod was the only exchange.
Marr and Luna had then headed past the array of aircrafts, vehicles, and equipment to a set of rooms built into the back wall of the hanger. They had entered the low building via a grubby door at the front.
Within was a small room with a door at the other end. Standing in the middle of the room, they had smiled at the overhead camera and waited for a small green light to luminate in the ceiling above the camera. Only then did they cross to the door and enter the large room beyond.
This room had an assortment of tables, desks, and chairs in different formations. The tables and desks were covered in various pieces of equipment.
They had quickly passed between the tables and desks to the back of the room. There they pushed the wall in a specific place and an opening appeared. This gave them access to a ladder. That ladder led down into a labyrinth of passageways.

Deeper into the underground complex, they had come upon a control room. Four console operators sat before a wall of screens.
One screen showed the room they had just passed through before coming down the ladder. However, the room wasn’t empty looking. Instead, it showed a dozen or so people moving about or sitting at desks. Marr and Luna saw representations of themselves in the image. The realistic nature of the made-up scene was uncanny.

Within the control room, one of the operators had looked up and welcomed them.
“Good morning. What adventure awaits you today?” he had said.
“We need a lift. We need to be dropped 5 km west of this outcrop,” Marr had said as she pointed to the map projected in front of the operator.
“None of that appeared out of order,” thought Luna as she continued walking backwards away from the outcrop.

Within the Citadel a similar assessment was taking place. However, it was not from the same viewpoint. 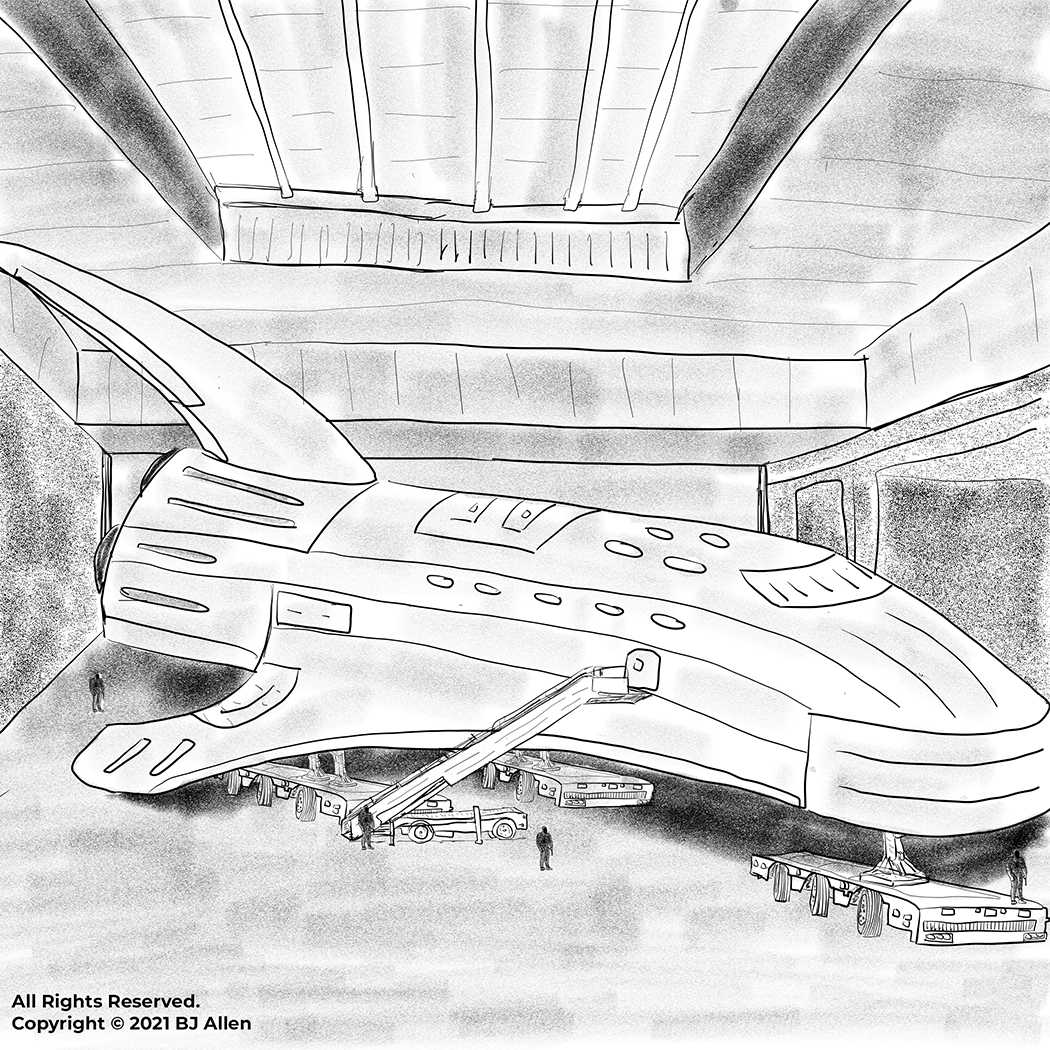